Asia Digital Engineering (ADE), the MRO arm of AirAsia Aviation parent Capital A, has opened a base maintenance facility at Senai airport in the southern Malaysian state of Johor, as it hopes to tap into a resurgence in travel demand following two years of the pandemic. 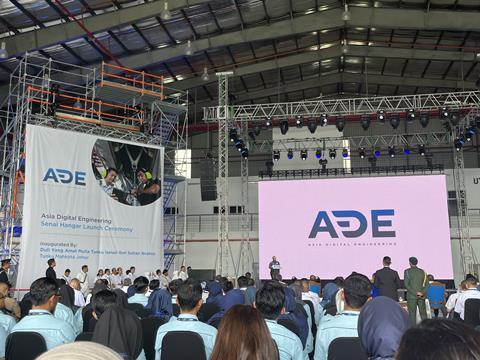 ADE chief Mahesh Kumar says about MYR4 million ($1.2 million) was invested in the facility, which Capital A says is its “single largest investment” made in Johor state.

Mahesh, speaking to FlightGlobal on the sidelines of the launch event on 18 January, says Senai airport was selected given its “strategic location”, as well as already being an AirAsia hub airport.

“[The] hangars are already ready. So we’re not going to [have to] build from scratch…[it’s] an immediate… fastest solution,” says Mahesh.

He adds: “[Senai airport] is not far from Singapore, so if there are any third-party [airline customers] flying to Singapore [for MRO work], it’s an easy direction for them to come to [us in Senai].”

Indeed, in a statement following the launch of the Senai facility, ADE and Capital A hailed the Johor location as the “crown jewel of the south”, noting that ADE will now have “greater proximity to service numerous economically bustling countries that will further expand its presence and services in the MRO industry within the Asia Pacific region, and beyond contributing vastly to the growth of Malaysia’s aviation industry”.

“I wouldn’t say that there is competition, because demand is still way higher than supply. The market demand is good…the opportunities are very wide. I wouldn’t see any issues in terms of competition,” he says.

He points out that ADE only handles about 45% of AirAsia Aviation’s MRO work, with the remaining work outsourced to other MRO players.

“So even with all our [seven] lines, we cannot fulfil 100% of AirAsia demand…that shows how big the demand is,” Mahesh tells FlightGlobal. He also sees the latest investment as a means to “kickstart” Malaysia’s aerospace sector, which he feels has “remained stagnant” for the past few years. 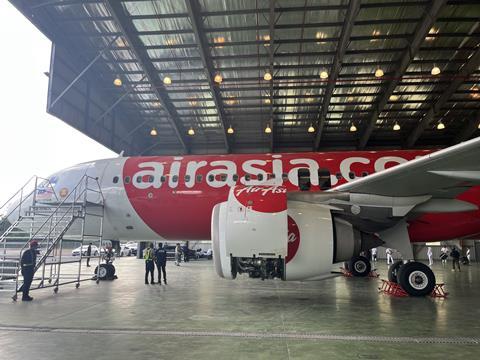 At the onset, ADE will handle AirAsia maintenance work at its Senai facility, before taking in third-party airline clients. Already, work on an AirAsia Malaysia Airbus A320neo (9M-AGB) – the facility’s first aircraft to be inducted – is close to completion. Another A320 is slated to be inducted for base maintenance, with more in the pipeline.

“[AirAsia] still has a lot of aircraft on ground [to be returned to service]. Until all the aircraft get back to service, we don’t see much third party work here,” says Mahesh.

The opening of the Senai facility comes as work commences on a 14-line hangar at Kuala Lumpur international airport. ADE expects that facility to be operational in 2024, providing a significant boost to its maintenance capacity.